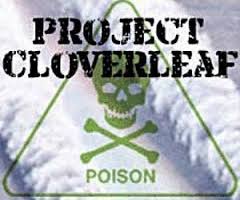 What happened to Project Cloverleaf?

In November, 2013, something strange crossed our horizon, hardly recognized as what it eventually might have been. First step; activists from the US reported chemtrailing has stopped. On the same days in Europe, chemtrailing took a week off, then resumed with slightly different patterns, showing more slopes from planes turning around close to the German-Polish border.

indeed was grounded. The company that was very likely running drugs for the CIA over decades to finance black ops, and – in cooperation with the NASA, Raytheon and Bell Labs – did the major job in chemtrailing in the early years of experimentation, before they forced the navy into the business, declared bankruptcy.

Evergreen International stayed grounded, the employees have been handed over to the bureau for unemployment statistics.  Only the Navy apparently resumed spraying.  They initially had joined the spraying club after the American Admiral, Jeremy Boorda, refused to get into business was shot twice in the chest, making the media state it was suicide.

During the same week in November, 2013, Russia declared their intent to cease spraying, with the cooperation with the UN-run international Office for the Coordination of Rocket Shields – an office that from a simple point of logic should be in responsibility to also coordinate the spraying of the particulate plasma necessary to run rocket shields.

The chemicals (Ba, Srx)TiO3 and Al2O3 form a reflective particulate background that is necessary for 3D battlefield monitoring as well as for the elimination of rockets with space-based laser weapons.The same nano-particles also enhance the range of radar.

And, during that same week, Ryan Air declared bankruptcy, despite being rated as the most profitable European airline a few months prior.  As the cheapest airline of Europe, it was largely suspected to have a deal co-spraying during commercial flights. Ryan Air was not grounded, they simply seemed to have found an investor for a slightly different business concept.

After that week, the week so many perpetrators of chemspraying activities ceased operation for one reason or another,  the harvest of German solar power plants jumped up by 40%, reaching values that haven’t been reached since 2004, when heavy chemtrailing in Europe started. This is effect is still stable in Spring, 2014.

Interestingly, since that November, the prices for “cheap flights” in Europe doubled on average. Also the monitoring of particles in rainwater showed a different picture than before.

Before we jump into the recent particle analysis, for those who are not up to date, chemtrailing used to consist of the particulate plasma produced in spray pyrolysis within the jet engines, (Ba, Srx)TiO3 and Al2O3, which rather was the military domain, and of a second compound that was sprayed cold, which rather is the domain of the agencies. The particulate plasma was designed to stay in the atmosphere as long as possible. The cold sprays were aimed at water reservoirs and urban areas and were meant to hit the biosphere and poison the people as effective as possible.

The cold sprays contain the compounds of self-assembling nanobots, composed out of self-replicating fungi aka Morgellons and quantum dots, fluorescent dyes that transform radio signals into DNA-readable light and vice- versa biophotons into readable radio signals. A perfect read/write unit, able to record and playback any stream of thoughts and emotions. The entire agenda gives you a combination of surveillance and mind-control.

Third compound discussed were nano-bots loaded with nano-explosives to turn people into walking mines. Ignitable via satellite, which as the main reason for the surveillance part, to be able to target every single individual and press the bottom. It had been tested on animal-populations in January 2011. Till today, birds catch fire when they fly to close to certain radio-transmitters. Other compounds looked like agents for reprogramming DNA.

Now back to the development of the year 2014: The particulate plasma, i.e. (Ba, Srx)TiO3, CaF and Al2O3 designed for military applications, stopped dominating the picture.

Although it still was there; especially CaF, that is also useful as a biologic weapon to keep the people dull, quiet and peaceful (like the fluoride in drinking water and toothpaste).  Other substances that appeared were: Karminit, containing Pb, Fe and As, Lead titanate, Lead nitrate, Iron (II) sulfate, Gallium arsenide, Lead-zirconate-titanate.

Beginning of April 2014 there were nano-bots or agents that continuously emitted strong radiation on the W-LAN frequency, something that meets with my suspicion that the personal W-LAN emitted by routers and laptops are also involved in the mind-control agenda.

The first week of May 2014 started with the spraying of Nanocytes, green hollow nano-shells very likely containing certain enzymes (from a French analysis) and fungicides. These Nanocytes have been developed for safe transport of medication into the human body. 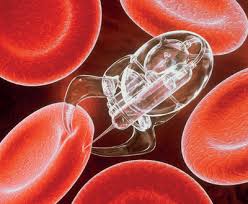 when one blew on them. This could indicate an up-conversion of infrared into the visible spectrum – substance unknown. Up conversion of frequency is one of the standard physical effects used in transhumanistic technologies, where one needs rather low radio frequencies to penetrate the body, as well as an agent that turns those low frequencies into the visible light that is readable by the human DNA clusters. However, this is supposed to happen on defined frequencies. White light is neither targeting the mind nor the sexuality, it just energizes.

Along with that there where black spots in the rainwater,  which were transparent and looked a bit oily. No one had a clue what that might have been. The substance seemed to completely absorb any frequency of light. At first sight, these things simply look like they originate from the trans-humanistic fraction, one phase of many designed to achieve a slow transformation of the genetic structure of mankind and to establish the interface needed to turn humanity into what Ray Kurzweil – the godfather on the trans-humanistic agenda – calls the “human-machine-civilization”.  Step by step, over time.

In any case, compounds sprayed as part of this agenda have been changing every 6 months since the program started, seemingly performing a kind of genetic engineering program on the population. Although it is impossible to understand the concept of this genetic reprogramming, in a way it looks like the direction has been changed during the year 2014, or that a second party entered the scene adding something counterproductive.

Particles sprayed before had the tendency to absorb light from the human body, thus weakening its resources.

Now suddenly particles appear, that could be used to raise the scalar potential within the DNA clusters by turning heat to a broad spectrum of colors within the visible spectrum, pushing humanity back to where it originally wanted to evolve to.

For a better understanding: the thing called Ascension is nothing other than a up-shift in the density of the light stored in the bi-directional bio-photon exchange within the DNA clusters, and this is what all these technologies were aiming at, stealing the light from the clusters, keeping us down, holding us back from ascending to higher realms.

Also, the thing with the fungicides is fringe. They might be helpful to fight the Morgellons disease. The disease was spread by spraying mycelium, producing the plasmonic antennas (mycelium/read unit) and the hexagonal plasmonic photonic crystals (spore-carrying organ/write unit) needed to establish an interface between electromagnetic signals and the DNA light communication, that was necessary to achieve bi-directional access to the body, both for surveillance and mind control.

This – I guess – is what has been sold to the agencies. In spiritual means, they were kind of the agents that were sucking the light out of our DNA clusters and transformed it into radio-signals, lowering our overall frequency – which rather refers to the black magic background of certain entities within the banking system, the CIA and the western governments.

Without being able to say if there is a direct connection, the levels of bio-photon activity in nature have been explosively rising since beginning of May. The measurements that were made really show values that are mind-blowing. Sensitive people can literally feel their DNA clusters vibrating; many other people face their demons, meet unsolved emotional patterns out of their past, out of older incarnations. Of course, this also can simply be the rising of the Golden Age. But it could – also – be connected to that fringe glowing substance under the microscope, that emitted flashes of light when breathed upon.

From the clairvoyant side we have reports that – at the end of 2013, beginning of 2014 – the seemingly invincible block of evil fell apart in a number of small, and one medium part.  The latter is still strong, but not invincible anymore.

Does anyone have information to explain what happened out there? Possibly

Russia decided not to fall under the dependency of Monsanto. If they would have continued spraying the particulate plasma for military purposes they would have lost their harvests in 2014 – we all would have lost our harvests – and would have fallen into dependency of the delivery of barium- and aluminum-resistant crops patented by Monsanto in 2015. It is possible, that there was a higher priority to avoid this than to maintain a rocket shield against the aggressive approach of the US-military that is expanding eastwards violating every single contract signed when Russia agreed to let the curtain fall back in 1989.

It is possible that the NSA realized how deep the CIA and the trans-humanists were into black magic rituals, preparing the assimilation of humanity by archons (i.e demons). This is what Morgellons are also about: the fruiting bodies forming in the intestines and uteri of infected people serve as light-placentas for archontic-babies.

Cutting of money supply is one of the core techniques of the NSA to redirect things. Remember Evergreen & Ryan Air. Possibly the CIA sent Snowden to take revenge on the NSA. If this is it, and this is all they have to offer, goodnight CIA. Possibly, a third party decided to break the rules and help humanity out. If this is it… thanks folks.

Possibly there is a war out there, literally between light an darkness, between up-converting shining agents and light-absorbing oil. As things look, only NATO ,as the private army of the private banking system, is still holding up the real “axis of evil” and continues to spray in the old style. The current ‘axis of evil’ consists of NATO plus the countries that joined the “NATO partnership for peace”, as well as those in the Antarctica Treaty in the southern hemisphere.

Now it is all about bringing them to reason. Realizing that these institutions

went far beyond democratic control… Like the UN… Like the EU… and bringing them to heel if not dismantling them altogether.  If anyone has knowledge about what happened behind the curtains, feel free to contact me. Godspeed.

EDITOR’S NOTE: In keeping with the idea that major airlines may have curtailed or even eliminated some of their spraying for whatever reason, the fact is airfares from London’s Heathrow Airport to Logan Airport in Boston have jumped to hitherto unseen heights!  There is no oil shortage, that is manufactured to keep prices high. So, in the absence of spraying contracts perhaps…fares have tripled in 2014 alone.

2 responses to “Chemtrailing and Ascension”